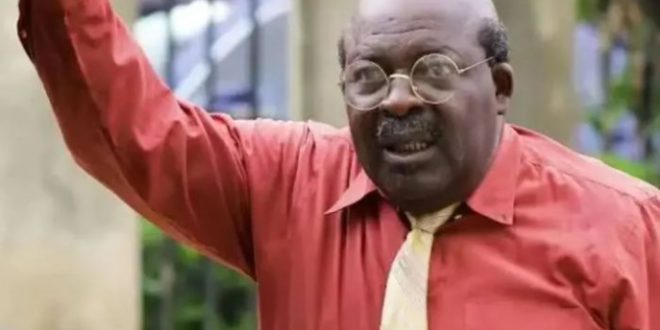 Richard Abiodun Ayoyinka, a seasoned Nollywood actor also known as Papa Ajasco, has refuted rumours that he is deceased.

The clarification was required as a result of the passing on Saturday night of Femi Ogunrombi, who succeeded him in the position in 2006.

Because some media outlets mistakenly used Ayoyinka’s images to accompany their news instead of those of the deceased Ogunrombi, the death of Ogunrombi led to misunderstanding.

In order to prove to his supporters that he was still alive, Ayoyinka created a video.

He thanked his supporters once more for their worries.

Nigerian family television sitcom Papa Ajasco and Company, also known as The Ajasco Family, was developed by Wale Adenuga in 1996.

In the comedy series, Papa Ajasco is a womanizing baldhead spouse who frequently beats his head with his hands when startled by something.

With Wale Adenuga’s approval, Ayoyinka began portraying the Papa Ajasco persona, but she stepped down so Ogunrombi could take over for the next two years.

Years later, Ogunrombi said in an interview that Ayoyinka was more popular with the public and that Wale Adenuga had begged him to give the part back to the original performer for financial gain.

Ayoyinka closed the video with his trademark in the enduringly popular Wale Adenuga Production series (WAP).

I'm a radio Dj,blogger,teacher and entertainment critic who loves music and like promoting creative art to the world.
Previous Don-K volunteers to pay Bulldog’s GH¢48k court fine
Next You call for music videos but don’t patronize it – Samini to his fans