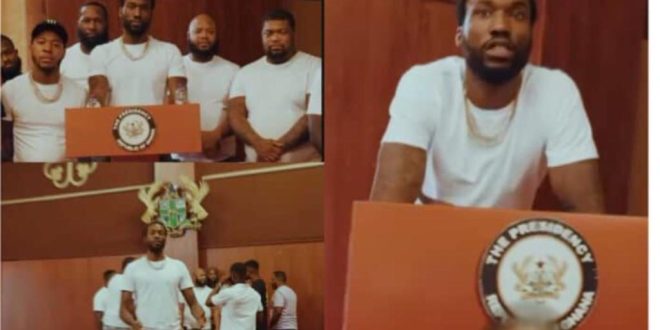 The music video that rapper Meek Mill posted and that was filmed at Ghana’s Jubilee House has since been taken off.

It turns out that parts of the aforementioned film were recorded during his stay in and around the Jubilee House. He was spotted throughout the presidency, including on the facade, in the principal corridors, in the main conference room, at one point sitting behind the president’s podium, and subsequently rapping in a sitting area.

Some of the Ghanaian population who were critical of the government for permitting such sensitive places to be filmed for a music video caused a great commotion in response to the music video.

Ghanaweekend.com can say with authority that the rapper has so far erased the video following significant backlash.

I'm a radio Dj,blogger,teacher and entertainment critic who loves music and like promoting creative art to the world.
Previous River Jamboree 2022: A December event that feted the Volo breeze
Next Meek Mill’s Jubilee House Video is Selling Ghana to the World — NPP’s Mustapha Hameed