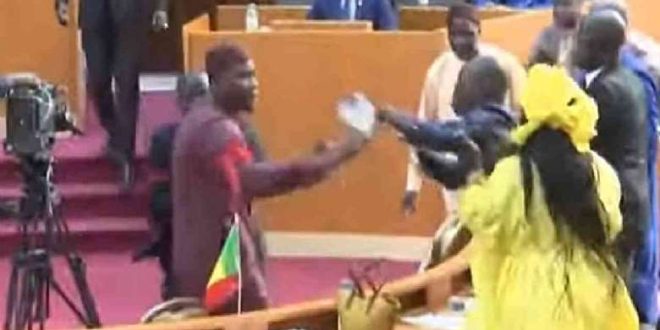 Senegal MPs sentenced to prison for assaulting a pregnant coworker

Two opposition MPs in Senegal have been given six-month jail sentences for kicking a pregnant colleague in the stomach during a budget debate.

The male lawmakers attacked Amy Ndiaye after she criticised an opposition religious figure.

The incident was widely condemned and sparked a debate about women’s rights.

In a video widely shared online, Mr Samb is seen walking towards Ms Ndiaye and slapping her during a routine budget debate on 1 December. She then retaliates by throwing a chair, but at the same time gets kicked in her belly by another male colleague. A melee then breaks out as other MPs try to calm the situation.

Ms Ndiaye, a member of the ruling Benno Bokk Yakaar coalition, fainted in parliament after the attack and there were fears that she would lose the baby.

Despite the video evidence, lawyers for Mr Niang and Mr Samb argued in court that their clients had not physically attacked Ms Ndiaye.

They also argued unsuccessfully that the two lawmakers were immune to prosecution.

“They are going to remain in prison pending an appeal,” one of their lawyers, Abdy Nar Ndiaye, told AFP.

There has been tension in Senegal’s parliament since the government lost its majority in legislative elections in July last year.

I'm a radio Dj,blogger,teacher and entertainment critic who loves music and like promoting creative art to the world.
Previous Nollywood star Emeka Ani says he is going blind
Next Asonabah -Tokro (Prod. By Liberty Beat)