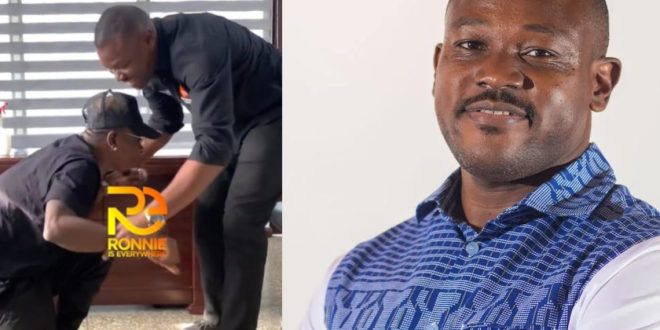 Shatta Wale has apologized to the event’s sponsor after declining to play at the Hogbgetsotso Festival despite having a contract.

In a video posted by blogger Ronnieiseverywhere, Shatta Wale was seen pleading with the sponsor’s representatives for forgiveness on behalf of the Dancehall performer alongside Bola Ray.

“It’s unfortunate what happened, but you are the CEO I will let the man (Shatta Wale) himself speak,” Bola said.

The ‘On God’ singer bowed down before Joseph Addo-Yobo, Executive Director of Total Family Health Organization and owner of the Ebony Condoms brand, as soon as the eminent broadcaster finished speaking to apologize for missing the event for which he was scheduled to be the headline performer.

Addo-Yobo held Shatta Wale back from bending both of his knees and motioned for him to take a seat while expressing dismay at Shatta’s behavior.

A woman sitting next to them said that Shatta Wale shouldn’t have knelt down because it wasn’t the reason they were there and then hugged him.

“It is interesting to note that Shatta Wale had shown up at the concert venue in vehicles rented for him and his team by the organizers yet could not be found afterward.

“All efforts by the two management teams to get him to come to the concert grounds to perform to the waiting crowd proved futile,” parts of the statement from the organizers read.

It was reported to be a tense situation as angry spectators attacked several organizers by throwing rocks at them and wrecking their equipment.

Shatta has spoken out on social media after remaining silent for days to explain his absence from the stage.

The Dancehall singer gave his own account of events, claiming that the organizers had insulted him.

Shatta backed up his claim with the claim that he was transported directly to a radio station to give an interview despite having previously made an agreement with organizers not to take part in such a plan or even greet any leader.

He continued, and that’s when he left, with one of the organizers threatening to stop providing him with lodging if he declines the interview.

I'm a radio Dj,blogger,teacher and entertainment critic who loves music and like promoting creative art to the world.
Previous Today’s front pages: Wednesday,30 November, 2022
Next Man Arrested For Be@Ting Girlfriend To De@Th For Refusing To Transfer Money His Client Paid Through Her Account