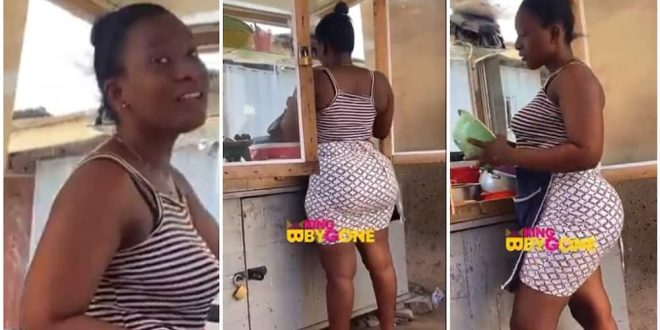 Since she became popular, Dansoman beans seller has said that she frequently receives calls from males at unusual hours.

The Dansoman Beans (Gob3) salesperson, Celestine Etornam Hodor, stated that since she became viral, men have been phoning her at weird hours to buy.

She disclosed details of her life to SVTV in an interview, stating that she now turns off her phone at night due to calls from males asking to buy her food at weird hours.

She claims that she began selling Beans (Gob3) when the bread she had been selling stopped being successful.

The bread was providing enough revenue to support them as a single mother and her child’s father, who had abandoned them, so she had to stop and start a more lucrative business.

When she went to see an aunt who used to beans (Gob3) but had retired, she got the idea to sell beans (Gob3).

I'm a radio Dj,blogger,teacher and entertainment critic who loves music and like promoting creative art to the world.
Previous Man Arrested For Be@Ting Girlfriend To De@Th For Refusing To Transfer Money His Client Paid Through Her Account
Next Jackie Appiah stuns in beautiful birthday photos