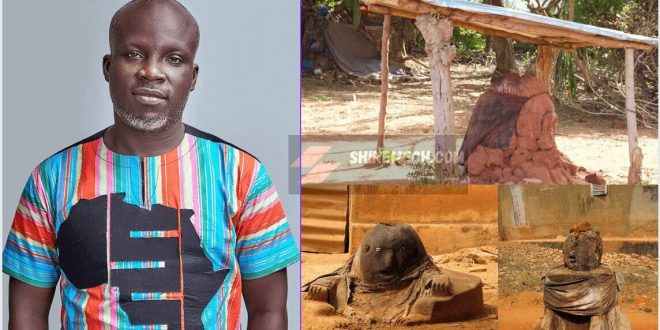 Ghanaian social media activist and poet, Selorm Ameza  has his shared concern about the denunciation of “Vodu” and “Legba” in our communities.

#Vodu also spelt #Voodoo by the West, literally means “To free the Community” and is one of the oldest Religions according to the history of the world. And this has been the spiritual and religious practice of the Ewe people in the Volta Region of Ghana, Togo and then Benin long before Christianity was introduced with “slavery” and Islam also introduced with “raids and rapes”.

#VO means “FREE” and #DU means “TOWN”. And so we can rightly say that our Ancestors saw “Vodu” as a Guardian of the community and used it as a way to protect, Guard and free the community from bad things like evil people and evil spirits as well as airborne and moving diseases. So Vodu is indeed a Protector of the people and the community.

#LEGBA on the other hand from my studies is one of the gods of Vodu which acts as “The Guardian of the Gate” and is erected at the entrance or gate of every town, community, village and house.

It doesn’t stay indoor and is in so many contexts the “GATEKEEPER” of the community or house and acts as the Protector of the Community or household from traveling spirits, sicknesses, people with evil intentions and many other mishaps like I’ve stated earlier.It is also said to protect the Individuals and Members in every Community or Household even as they travel or stay out of town.

The LEGBA that is erected or positioned at the entrance of every town is called “Du_Legba” which literally means “Town_Legba” or “Town Guardian” since #Du means Town in the Ewe dialect.The LEGBA that is erected in front of every household is called the “Agbonu_Legba” or #Agbonudzor which literally means “Gate_Legba” or “Gate Guardian” since #Agbonu means Gate in the Ewe language and “dzor” also means “Guard”.

I’ve heard arguments from Christians who come from houses with powerful Legba say that “Legba” is not a Vodu but then a Tradition which is part of our culture as a people. This is because “LEGBA” is not used to do anything evil except “Protect” and a lot of the Christians from this homes have experience the potency of Legba in their lives and so see it as part of Who they are and not part Vodu since it is a generational thing.

And I’ve also heard Vodu believers say that “Legba” works hand in hand with “Vodu” to protect the People, community and every household.Would seek more understanding on this and share with you!!!

Haiti has the same LEGBA in their culture and they refer to it as “PAPA LEGBA” and is said to be the “GUARDIAN OF THE CROOSROADS”. #Papa_LEGBA represents the Guardian at the center of power and support in the home.

This is proof that most Haitians were taken from the Soave Coast in Ghana around #Keta and #Whiddah in Togo to Benin. Because the fact that we share a similar culture of “LEGBA” with the same name and meaning should inform us that we are the same people.Would write more about this topic after I have had a personal journey to experience first hand and research to understand our African Traditional Culture within the coming weeks.

Hoping to have Efo Mawufemor Korbla Nornyibey take me on this journey and I’d share my findings with you.
I believe the time has come for We Africans to write our own story and speak to idolize our culture and traditions in order to change the narratives of always demonizing our Traditions and Culture as devilish, when they are indeed our “FREEDOM” and “GUARDIANS” and have been so for centuries.

Still get scared around Vodu due to the years of misinformation’s and indoctrination from the West. But we would overcome and embrace our Culture. And we would also start a “Traditional Prayers Alpha Hour” like my Christian folks always tagging me in Alpha prayer things.