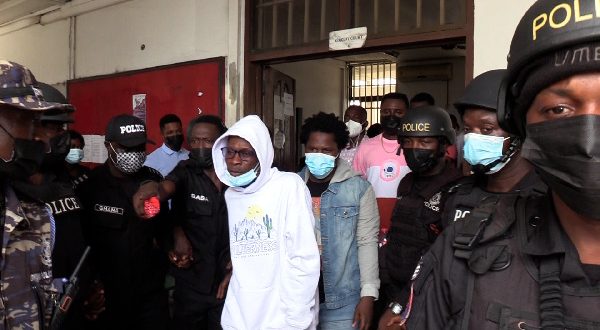 They have pleaded not guilty to the charges.

The artiste, together with, Kojo Owusu Koranteng, also known as Nana Dope, Eric Venator, aka Gangee and Iddriss Yussif, were remanded to re-appear on October 26, 2021.

Counsel for accused persons, Mr Jerry Avenorgbo had prayed the court to grant his clients bail as they were not a flight risk and had a fixed place of abode.

However, the prosecution, led by Chief Inspector Dennis Tekpetey opposed the bail application urging the court to remand the accused persons for further investigations.

He argued that another aspect of the case was still under investigation and hence granting bail to the accused persons will interfere with the investigation.

The court, upheld prosecution’s argument and remanded the accused persons.

The judge, in remanding the accused persons said, “As much as the liberty of an accused person is paramount, the safety of society must be considered”.

I'm a radio Dj,blogger,teacher and entertainment critic who loves music and like promoting creative art to the world.
Previous Today’s front pages: Thursday, October 21, 2021
Next Actor Charles Okocha Smashes Man’s Car Glass Into Pieces After Spotting His Daughter In The Car (Video)