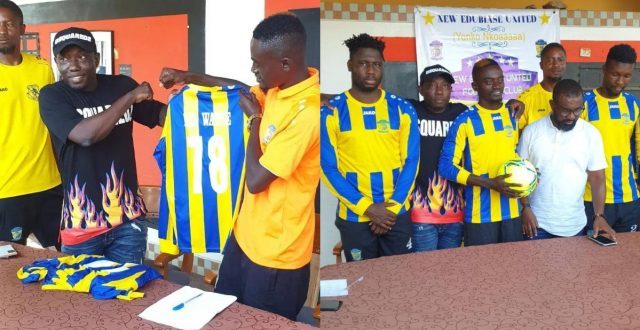 After actor and musician Lilwin was recruited as a new player for New Edubiase Football Club, supporters have had varied reactions, with some believing they aren’t serious.

Lilwin is a former actor who later became a musician, and now he is a footballer after being signed as a new player for New Edubiase Football Club, and some internet users believe the club’s leaders aren’t serious at all.

No one knows if Lilwin is a professional player for a football club to sign him, but New Edubiase has gone ahead and signed him as their new player, and everyone who has heard about it believes they are a bunch of fools for bringing him on board.

The reason for signing Lilwin to the squad is unknown, but we assume it is for public relations purposes, as they want his fans and followers to become supporters of the Football club in order to increase their numbers, as he has a large following.

Whatever the rationale for signing Lilwin as a new member of their club, netizens believe they aren’t serious about bringing him on as the first player because he is known to be an entertainer rather than a football player.

This season, the football team New Edubiase has added some new players, including Lilwin, a humorous actor who also happens to be a singer. We’re excited to see how good or awful he is as a footballer.