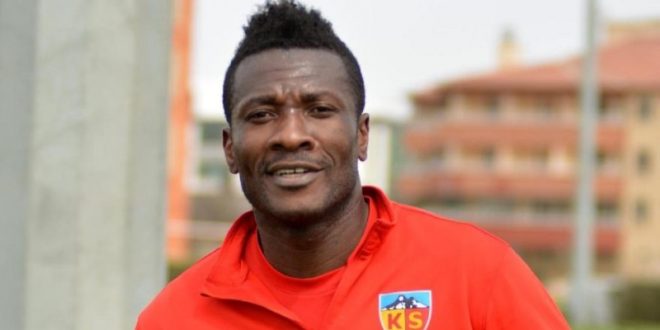 Ghana’s very own Asamoah Gyan is a firm believer that he does not get the recognition he deserves from Ghanaians.

Thus, Gyan feels that despite his achievements for the country called Ghana, he is still not accorded the respect that is due him by the populace.

Speaking on Kessben FM, Gyan said that he was pleasantly surprised by the invitation by the Confederation of Africa Football to have him as one of the legends that graced the draw for the 2021 Africa Cup of Nations.

Gyan says the honor done him further shows how much he is regarded on the continent, a feeling he does not get from Ghanaians.

“I feel very honoured to be part of the legends to run this draw. I was a bit surprised but not too surprised because of the level I have reached in my football career. I’m not respected in Ghana but outside Ghana, I’m highly revered.”

Gyan believes that he has still got something to offer the national team and is working to regain fitness.

“I have not retired from football. There were some injuries last season but I am not done playing football. I can wake up one day and announce my retirement from football but at the moment, I am active,” the country’s all-time top goalscorer told Kumasi based Kessben FM.

As a reminder, Asamoah Gyan, 34, has scored 51 goals for the Black Stars of Ghana.

I'm a radio Dj,blogger,teacher and entertainment critic who loves music and like promoting creative art to the world.
Previous ‘Forget about your Jollof, Ghana Jollof is the best in the world’- Sarkodie boldly tells Nigerians while in Lagos
Next GOSPEL MUSICIANS ARE HYPOCRITES, THAT’S WHY I ROLL WITH SHATTA WALE AND SARKODIE – Empress Gifty