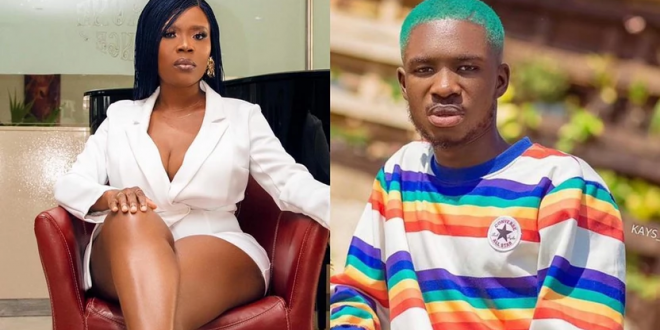 Delay has expressed her disappointment in Moesha Boduong’s P.A for acting unprofessionally.

Moesha’s P.A, Samuel Nelson, betrayed the actress recently after his gossip with Salma Mumin was leaked. Nelson in the conversation with Salma detailed what has been happening to Moesha and claimed that Moesha may be paying for her bad deeds.

According to Nelson, Moesha was dating different men and during a video call, she mistakenly saw one of them, who is a Nigerian senator, in a bloody occult act. He adds that what Moesha saw scared her, tormented her mental health forcing her to run God.

Addressing the matter on her show, Dealy said “there was an audio of someone purporting to be Moesha’s brother but it later turned out that it was not true and that he was Moesha’s PA. What shocked and got me perplexed was that he said Moesha was going to suffer“.

She continued that “this is someone who from all accounts has been working with Moesha and almost at home with her … In this world, if God does not take care of you, you’ll bring your enemy into your house. I never met the boy but the person who informed me mentioned this guy’s name as the one spreading it. So he has really sold Moesha but God should have mercy on us“.

Moesha Boduong and her PA Nelson

Delay used the incident to advise her colleagues and viewers that “I blame all of us. Sometimes we meet people and pick them up as relatives, it’s good but we should be careful. Your friend can never be your brother. Often we hear stories of people being introduced to drugs, other vices and in all cases, it’s friends, not brothers“.

“All problems we get in this world are from friends. Most of my issues have been with friends so today I’m using Nelson as a point of contact to all celebrities to be careful. Let’s be very careful with people we pick as friends. I don’t know what to say aside from being shocked and perplexed. How can you tell someone who has fed and clothed you that she will suffer, you will rather suffer, Nelson,” she concluded.