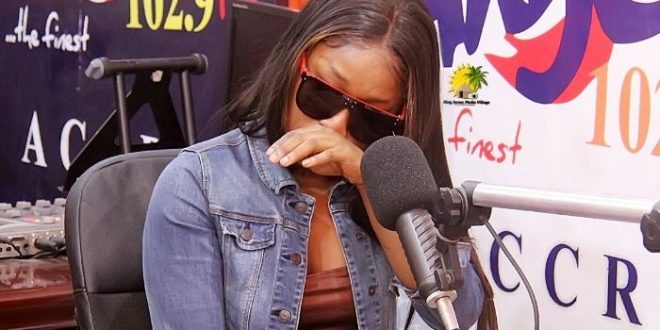 Actress Efia Odo has broken down in tears on-air over comments some people are directing at her over the death of fix the country activist Mohammed Ibrahim Kaaka.

Odo says people have been hitting out at her for causing Kaaka’s death.

The accusations have seriously affected Efia Odo, who looked heartbroken on the show.

She was speaking with Kofi Adoma Nwanwani on Angel Fm when she broke down.

She revealed that she is even blaming herself now for Kaaka’s death.

Odo says since the fix the country activist was killed by a mob in Ejura Sekyeredumase, many people have blamed her for his death.

According to her they send comments at her implying at if she had not started the whole fix the country movement, Kaaka would still be alive.

Efia said the comments affect her but she does not feel like she caused it.

According to her, Kaaka was an activist long before the fix the country issue.

She also said no one would have complained if the country was in a good state.

Odo said the blame should be on the government and those in charge for failing to protect Kaaka and for killing people protesting his death.

An emotional Efia Odo said she did not want to reply to this but the accusations against her are too much.

Odo tearfully said she now even feels that the unrest is partly her fault.

Blaming Efia Odo for any of this is the height of absurdity, but something to be expected from Ghanaians.

Instead of blaming the authorities, we are blaming the people who are fighting for a better country.

I'm a radio Dj,blogger,teacher and entertainment critic who loves music and like promoting creative art to the world.
Previous ‘Shout out to my haters’ – Yaw Tog shades Asakaa boys as he bags Hip-hop Song of the Year
Next Shatta Wale loses over 1,700 Facebook followers after comments on Ejura killings