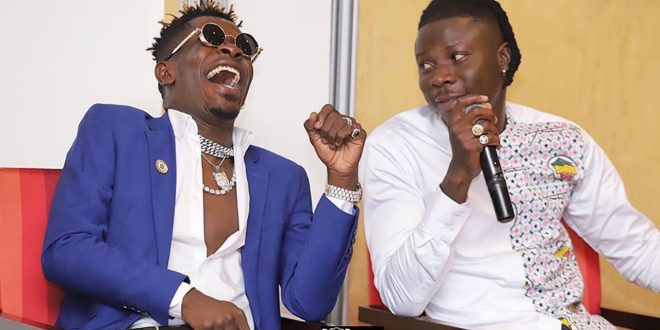 VGMA to lift ban on Shatta Wale and Stonebwoy

The Vodafone Ghana Music Awards (VGMA) board has internally agreed to lift its ban on Shatta Wale and Stonebwoy ahead of the 2021 edition of the show.

Speaking on Daybreak Hitz on Hitz FM, Robert Klah, Head of Public Events and PRO at Charterhouse said a conversation on when to lift the ban ensued at the board’s inaugural meeting.

“It was in principle decided that the ban should be lifted,” Robert Klah told Andy Dosty, host of the show.

He stated that Charterhouse will make an official announcement after the organisers meet with both artistes and their management teams to sort out outstanding issues.

“There is a reason why this altercation happened and you want to be sure that they don’t resurface. You want to have that kind of conversation to understand and agree on how things should move,” he told the host Andy Dosty.

Stonebwoy and Shatta Wale were banned indefinitely from participating in the VGMAs after an altercation between them marred the 2019 edition.

The former rivals were also stripped of the awards they won on the night and asked to return the plaques they had been given.

Because their altercation had caused panic many people fled the venue thus the organisers failed to announce the Artiste of the Year award, in which both were nominees.

Mr Klah stated that if the official announcement to lift the ban is made before the close of submissions for nominations, the artistes can submit their projects for VGMA nomination in the 2021 edition.

Also musicians who have collaborated with Shatta Wale and Stonebwoy in the year under review can also submit their works.

Artistes, artiste management, record labels, producers, instrumentalists, music composers, and other stakeholders have until February 15, to submit their entries.

I'm a radio Dj,blogger,teacher and entertainment critic who loves music and like promoting creative art to the world.
Previous Fella Makafui rejoins Farmhouse Productions for Stryke series
Next Yaw Sarpong and Asomafo cry for help; they need a car