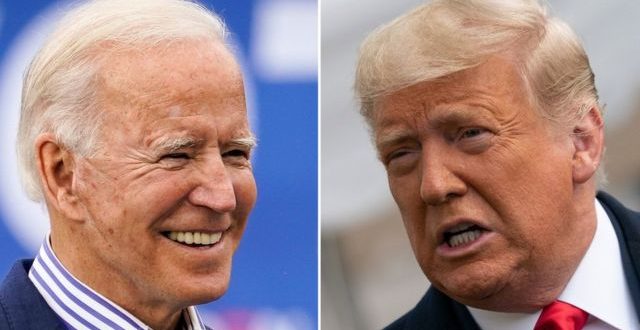 110
SHARES
ShareTweet
No candidate can credibly claim to have won as yet, and both campaigns said they had potential paths to victory.
Mr Biden’s campaign said the race was “moving to a conclusion in our favour”.
But Mr Trump, a Republican, claimed to have won and vowed to launch a Supreme Court challenge, without providing evidence of fraud.
Several key states are expected to finish counting by the end of Wednesday but the election may not be decided for days.
The Biden campaign said it expected to win because several states would be called for them on Wednesday or Thursday, but the Trump campaign said it was confident that the maths was in its favour.
The US is on course for the highest electoral turnout in a century. More than 100 million people cast their ballots in early voting before election day, and tens of millions more added their vote on Tuesday.
What are the results so far?
Mr Trump has defied the pre-election polls to do better than predicted, but Mr Biden has a narrow lead in several key states.
In the US election, voters decide state-level contests rather than an overall, single, national one.
To be elected president, a candidate must win at least 270 votes in what is called the electoral college. Each US state gets a certain number of votes partly based on its population and there are a total of 538 up for grabs.
The vote tallies in the Rust Belt battlegrounds of Pennsylvania, Michigan and Wisconsin – which propelled Mr Trump to the White House four years ago – are very close.
But Mr Biden is currently ahead in Wisconsin and Michigan and a Trump lead in Pennsylvania could still potentially be overturned by mail-in votes.
Mr Biden could also snatch Arizona, a once reliably conservative state, and is ahead in Nevada, although counting is not expected to resume there until Thursday.
However, the president is projected to have held the must-win state of Florida, and another conservative sunbelt state, Texas, where the Biden campaign had dreamed of an upset victory.
Source:GhanaNewsAgency

I'm a radio Dj,blogger,teacher and entertainment critic who loves music and like promoting creative art to the world.
Previous [New Music] Lord Morgan – 1 Man Ft Edem
Next Youtube apologises to Kwadwo Sheldon for terminating his account