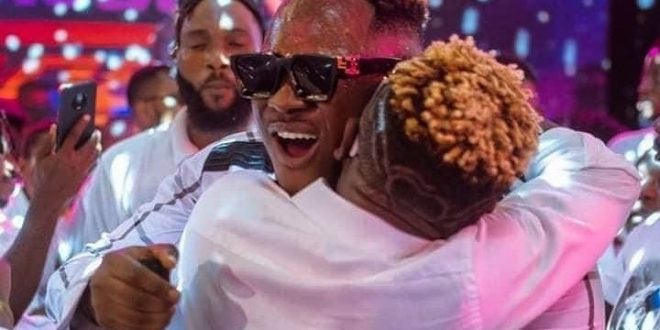 Shatta Wale and Medikal each get ¢100k bail

Reggae/Dancehall artiste, Shatta Wale and industry mate, Medikal, have been granted a ¢100,000 bail each.

The duo reappeared before an Accra Circuit Court on Tuesday, October 26, to continue their respective legal battles.

The self-acclaimed dancehall king, born Charles Nii Armah Mensah on October 19, turned himself in after the police had declared him wanted.

He had allegedly fabricated a story that he had been shot and receiving treatment, which turned out to be a hoax.

But when he appeared before the law court on Thursday, October 21, he pleaded not guilty to the charge of publishing false news and causing fear and panic.

‘The My Level’ singer, however, was remanded into prison custody for one week.

On the other hand, Medikal, known in real life as Samuel Adu Frimpong, was picked up by the police for brandishing a weapon on social media.

The ‘Risky’ hitmaker on Friday, October 22, was also remanded by an Accra Circuit Court for five days in prison custody although he pleaded not guilty to the charge of unlawful display of arms and ammunition.

The trio who are being accused of abetment of crime have equally been fined ¢100,000 each.

Interacting with the media after the hearing, Shatta Wale’s legal representative said the musician was given a self-recognizance bail.

Jerry Avenorgbo who was elated about the day’s hearing said “Shatta Wale will be able to reunite with his friends and family” as his case is still being heard.

He further divulged that the accomplices of the artiste are to provide a surety each.

The case has been adjourned to Tuesday, November 9.

I'm a radio Dj,blogger,teacher and entertainment critic who loves music and like promoting creative art to the world.
Previous Shatta Wale, 3 others return to court today over shooting stunt
Next Arresting Pastors Will Only Make You An Enemy Of God, Stop It – Pastor Warns IGP