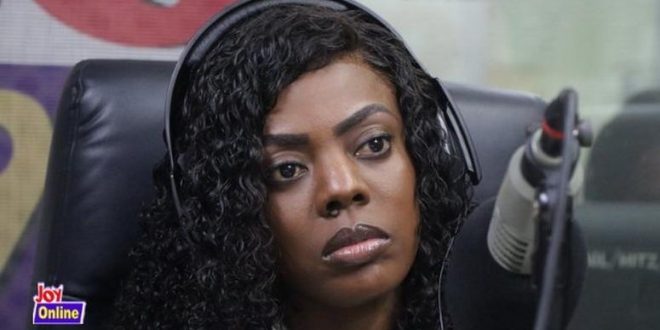 Ace broadcaster and philanthropist, Nana Aba Anamoah has put the brakes on her random act of kindness she’s often known for on social media.

This comes after revealing to her followers on her social media platforms in a thread of tweets and posts that a young man she helped secure a good paying job, had been arrested for theft.

“How can anyone do this to me? I don’t deserve this” she lamented.

“I AM DONE. I’m so ashamed,” she continued in one tweet.

Attached to the tweet was a screenshot of a message she received narrating the story of the alleged thief.

Having finally gotten a job after a long stale period and with the hope of making both Nana Aba and the mother proud, he joined an alliance of two other colleagues to embezzle about GHS 100,000 from the business. Meanwhile, he earned GHS 4500 as monthly salary from the same business.

Though much is not known about the identity of the said gentleman, subsequent tweets reveal that he was jobless six years after completing his masters.

I'm a radio Dj,blogger,teacher and entertainment critic who loves music and like promoting creative art to the world.
Previous How Shatta Wale helped me sell my Waakye business- Reggie Rockstone
Next I Dated A Broke Guy For 6 Months Because I Couldn’t Get Enough Of His Joystick – Blessing Okoro Confesses