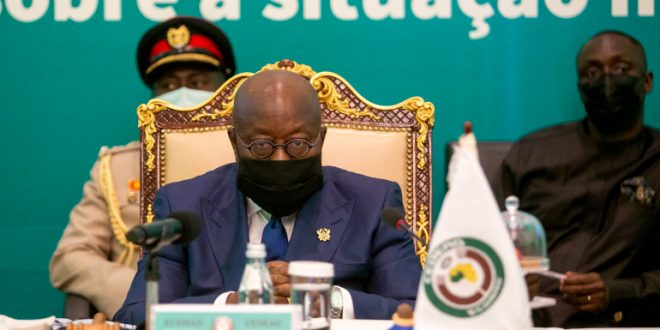 The Economic Community of West African States (ECOWAS) acting through its chair, President Akufo-Addo, has condemned the attempted coup in Guinea and called for an immediate return of the country to constitutional rule.

President Alpha Conde was arrested today and his government dissolved in an attempted coup by the military.

But President Akufo-Adoo in his capacity as the ECOWAS Chair has described the coup as “unconstitutional political change” which must not be allowed to fester in a democratic Guinea.

Below is the ECOWAS statement on the Guinea coup:

ECOWAS notes with great concern the recent political developments which have occurred in Conakry, capital of the Republic of Guinea. ECOWAS condemns unreservedly the attempted coup of Sunday, September 5, 2021.

ECOWAS demands respect for the physical safety of the President of the Republic, Professor Alpha Condé, and his immediate and unconditional release, as well as that of all arrested persons. ECOWAS also demands a return to constitutional order on pain of sanctions.

President of the Republic of Ghana and

Current Chairperson of the ECOWAS Authority