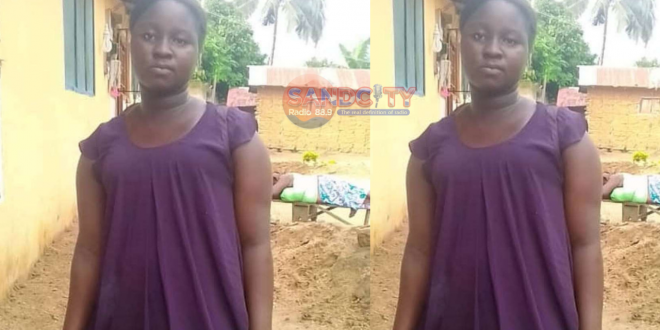 The 16-year-old apprentice, Stephanie Asamoah who went missing on Thursday, August 19, 2021, has been found.

Stephanie Asamoah of Nzema Aiyinasi in the Ellembelle District of the Western Region left home at 4:30pm where she deceived her mother of returning to work.

However, on Sunday, August 29, 2021, at 5pm, Stephanie Asamoah returned home after going to Tarkwa with her boyfriend.

Stephanie Asamoah is currently with Nzema Aiyinasi Police assisting the police with investigations.

Meanwhile, Stephenie Asamoah’s boyfriend whose name has been given as Donzy has run away from Nzema Aiyinasi after escaping arrest.

In an interview with this reporter at Nzema Aiyinasi on Monday, August 30, 2021, Stella Asamoah who is the mother of Stephanie Asamoah gave thanks to the Almighty God for bringing her daughter back after going missing for 10days.

She also gave thanks to the media, the security services, family and the general public who helped to search for her daughter.

“I thank God for bringing my daughter home safely and I also thank you the media, my family, the police who supported me to look for my daughter, in fact your announcement played a major role for finding her, she is doing well but currently she is with the police assisting them with information, she told us that she went to Tarkwa with her boyfriend to see his parents that he would marry her meanwhile my daughter doesn’t qualify for marriage,” she narrated.

She therefore, took the opportunity to advise young girls to obey and respect their parents.

“I will take this opportunity to advise the young girls of today not to copy the behaviour of my daughter and listen to advice of their parents.”

I'm a radio Dj,blogger,teacher and entertainment critic who loves music and like promoting creative art to the world.
Previous Kumi Guitar Robbed In Broad Daylight (Video)
Next Yes, My Case Is Still In Court But I’ll Still Twerk And Show Flesh For Money – Akuapem Poloo