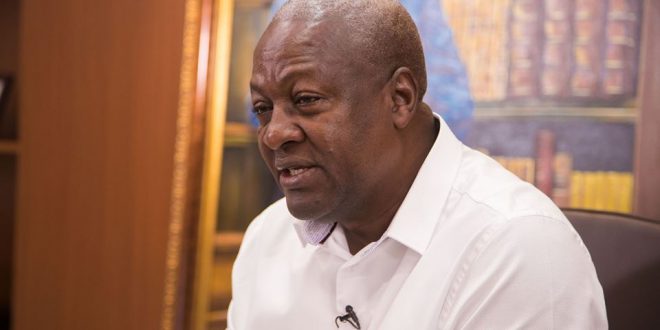 Former President and 2020 Presidential Candidate of the National Democratic Congress (NDC), John Dramani Mahama, says the NDC is ready to win the 2024 elections without the help of the Supreme Court.

According to him, the NDC performed creditably well in the 2020 elections and should have won the parliamentary and presidential polls if not for the “twisting of arms.”

Addressing party executives and supporters in Bolgatanga in the Upper East region, President Mahama said the NDC has learnt its lessons and will be ready to snatch power from the governing party in 2024.

“That lesson has been painfully learnt and shall not be forgotten. Elections are won or lost at the polling stations and collation levels and doing everything right, not at the Supreme Court” he added.

He also hailed the people of the Upper East Region for their contribution to the NDC’s effort by giving the party 14 out of the 15 seats in the parliamentary elections.

The former President also said the NDC increased its votes from around 4 million to over 6 million votes in the Presidential elections adding “but for arm twisting, we would have had 145 seats, and won a clear majority in Parliament.”

He stated that “we have learnt from our mistakes. Next time we’ll score 15 over 15 in this region.”

President Mahama is on a tour of the country to thank Ghanaians for their support and for voting for him and the NDC parliamentary candidates in the 2020 elections.

I'm a radio Dj,blogger,teacher and entertainment critic who loves music and like promoting creative art to the world.
Previous I’ve not retired from football, expect my Black Stars return – Asamoah Gyan
Next 46-year-old man dies moments after having S3X with his 25-year-old slay queen girlfriend inside his car – RIP John