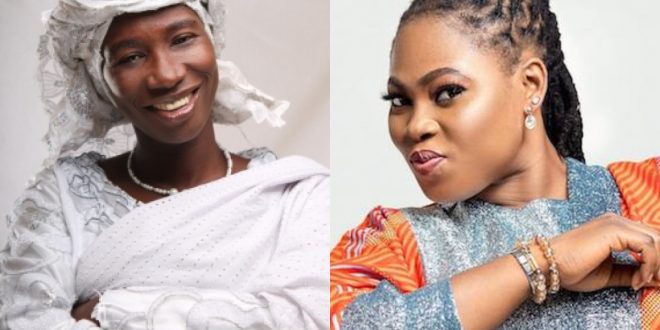 Joyce Blessing has revealed that gospel musician Cecilia Marfo apologised to her after the mic snatching incident which happened a few months ago.

While Joyce Blessing was performing during the Unity Group of Companies’ annual thanksgiving service on January 22, 2021, Cecilia Marfo snatched the microphone from her and said God was using Miss Blessing for His work but what was left was for her to go back to her marriage.

Most people criticised her for her action, saying it was wrong for her to have done that to Joyce in public.

Joyce in an interview with Hitz FM said Cecilia apologised the following day after the incident.

“When people are in difficult times, you call the person in private… you don’t do it to trend. She told me that she was sorry and she didn’t know it would go that way. She called me the following day together with her husband,” she told Andy Dosty.

She also said she did not believe in Cecilia’s prophecy because it was not from God because Madam Marfo could’ve spoken to her in private but not to grab the microphone from her to tell the whole world.

“Sometimes when God tells you something you have to apply wisdom… a pastor would have told me privately. We hear prophecies many times… You don’t do it when the people are going through trauma.

“I didn’t believe the prophecy. God walks with us all the time and He walks with me too. It’s not because of who she is… It’s about where she said it and how she said it… people talk about my marriage but I never said anything about it. God can talk to me too,” she said.

I'm a radio Dj,blogger,teacher and entertainment critic who loves music and like promoting creative art to the world.
Previous Fire destroys parts of Makola shopping mall
Next Actress Bibi Bright Shares Scary Story Of How Her Boyfriend Almost Murder3d Her