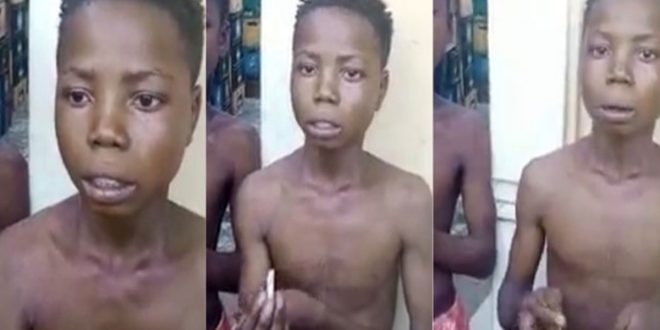 A 13-year-old boy simply identified as Ogaga who steals clothes and footwear and sells them in the market has been busted.

During interrogation, Ogaga who was caught with his friend confessed that he had to steal to survive as he’s an orphan who has lost both parents.

When asked why he smokes, the teenager admitted that it was a result of too much thinking, which emanated from not having a father or a mother.

The two teenagers, Ogaga and Tomiwa were caught by residents in the act of stealing clothes from lines and footwear from doorsteps, after series of complaints of missing slippers and clothes.

They however promised those who caught them that once they asked to go scot-free, they will turn over a new leaf.

I'm a radio Dj,blogger,teacher and entertainment critic who loves music and like promoting creative art to the world.
Previous Just In: Alban Bagbin’s convoy involved in a fatal accident, his dispatch rider feared dead
Next Teenage Mom Jailed After Leaving Her Baby To Starve To Death While She Went To A Party