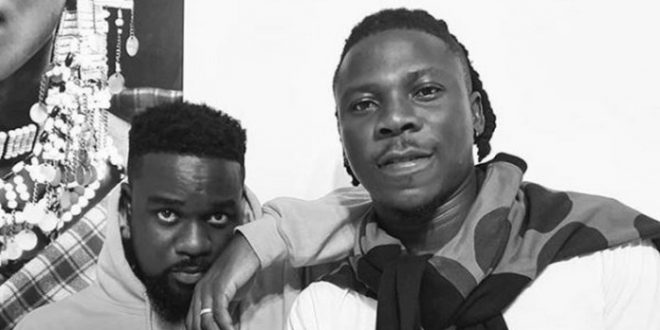 Stonebwoy Promotes Sarkodie’s ‘No Pressure’ Album Despite Their Beef

Ghanaian reggae-dancehall artiste, Stonebwoy has displayed his maturity following the release of Sarkodie’s “No Pressure” album.

It’s no news that Sarkodie isn’t in good terms with Stonebwoy as the two had a little issue before the rapper’s ‘Black Love’ concert.

Sarkodie packed several artists on the ‘Black Love’ show which Stonebwoy was part but during their rehearsal, the dancehall giant physically assaulted his manager, Angel Town.

Sarkodie’s release of his 9th album dubbed “No Pressure” has been trending since the release as all industry folks support and promote it.

Stonebwoy has however trashed the fight to throw his supporter behind Sarkodie as he took to his Twitter page to promote the song.

Taking to the microblogging site, Twitter he wrote, ” Greetings World! #NoPressure The album by @sarkodie is OUT NOW! Flag of Ghana Earth globe americasRocket,”

I'm a radio Dj,blogger,teacher and entertainment critic who loves music and like promoting creative art to the world.
Previous School boy receives goodies from KFC, Fan Ice, several others after tall ‘Our Day’ list goes viral
Next “I WAS UNABLE TO PAY GH¢15 RENT” – Ohemaa Mercy Shares Hustle Story