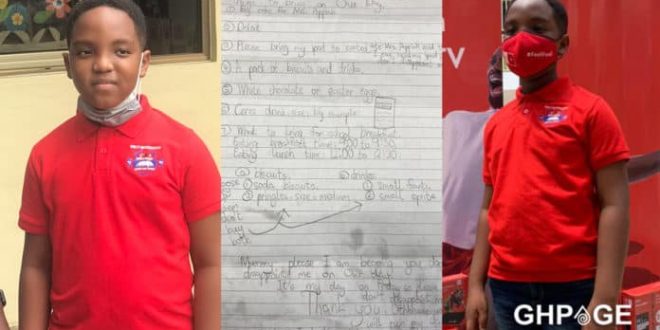 A young Ghanaian schoolboy named Oswald has become the latest internet sensation after his long list of items for ‘Our Day’ celebrations penned down to his mother surfaced online Thursday, July 29, 2021, and went viral instantly.

‘Our Day’, in a Ghanaian setting, refers to the closing ceremony of the school term for pupils.

A Twitter user, Gambit, took to the micro-blogging platform to share with his followers the items his colleague’s son presented to her ahead of his big day at school.

The 9-yeard-old’s list was influenced by the demands made by his teachers and the specific items they would want the student to bring to school.

The infamous list featured items like an iPad, which one Mrs Appiah, his teacher asked the student to bring along for the Our Day.

Additionally, the young student constantly reminded his mother not to disappoint him because he has fulfilled his end of the bargain by passing his exams with flying colours.

However, what started as a usual post to keep the timelines active ended up attracting freebies and offers from businesspersons and cooperate brands.

After chancing on the note, Hiplife artiste KiDi promised to go and give a free performance at the boy’s school just to make him happy.

As if that was not enough, food brands like KFC, Pizza Hut, Fan Ice, Dominos Pizza are delivering mouth-watering meals to him and his colleagues.

Bel Beverages and others came on board with pledges to give out products to the student and his entire class.

Access Bank promised to set up an account with 1000 cedis for him. Ashesi University promised to give the class a tour of their campus.

Check out some of the pledges in the screenshot below.

I'm a radio Dj,blogger,teacher and entertainment critic who loves music and like promoting creative art to the world.
Previous Benedicta Gafah can not steal my boyfriend- Hajia4Real speaks on alleged boyfriend snatching
Next Stonebwoy Promotes Sarkodie’s ‘No Pressure’ Album Despite Their Beef