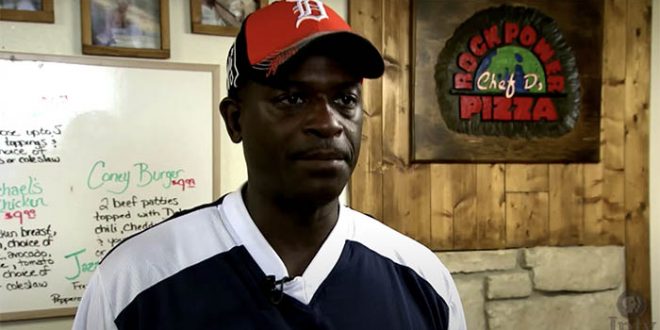 A young man, Derrick Walton has become a philanthropist after he decided to open an eatery joint where the less privileged who are homeless can come and dine for free.

On how he landed the job, he said: “Just before I was going to give up, on that 10th day, and I’ll never forget it, I went to a Greek restaurant in downtown Detroit.

I met with a gentleman, I told him, ‘Look I’ve made a lot of poor choices and decisions in my life.’ I said, ‘I’m not looking for a handout,’ I said, ‘but if you give me an opportunity or a chance, I won’t let you down. I’m a great cook’.”

On each Monday, Derrick would close his shop to the paying public so the homeless can have a variety of free food.

Volunteers have since joined in his kind gesture and they always weekly organize vehicles to transport the homeless to the restaurant.

I'm a radio Dj,blogger,teacher and entertainment critic who loves music and like promoting creative art to the world.
Previous Benedicta Gafah allegedly snatches Hajia4Real’s baby daddy, Latif
Next PRO of FIPAG threatens to drop names of men big men, including top pastors and politicians who patronize the services of ashawo