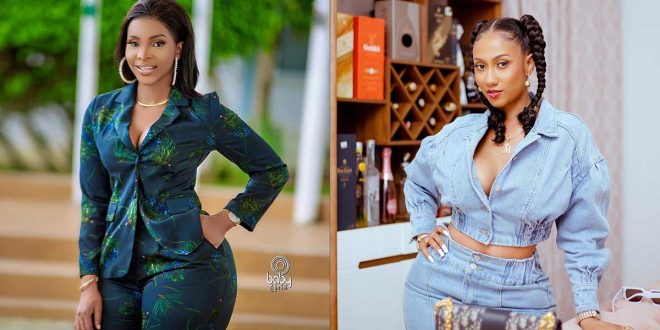 It has come to light that popular Ghanaian actress and television presenter, Benedicta Gafah has allegedly snatched the boyfriend of Hajia4Real for who she has a baby with.

Though the alleged boyfriend snatching scandal awaits confirmation, it is far from the truth it’s possible looking at the circumstance surrounding the whole allegation.

This was revealed by Instagram blogger, Aba The Great and according to her, her source had first-hand information about this.

The source alleged: “…Benedicta Gafah’s new boyfriend is Hajia 4 Real’s baby daddy o. I hear they made the relationship known during his house warming this past weekend,”

The source went on to claim that looking at how Benedicta looked comfortable in the house around Latif whilst Hajia4Real watched on helplessly gave her the impression that Benedicta has taken what rightfully belonged to her.

“From the way she (Gafah) was comfortable in the house and how she had full access to his phone the whole time got a lot of people wondering,” the person added.

It’s alleged Hajia4real baby daddy, Lattif is now dating Benedicta Gafah, alias Latifah…. we are also told there was a house warming party at his residence last weekend and sis had full access to his phone, playing around it as if she was playing candy crush  and kept others wondering…. please be reminded that this same Lattif was dating Hajia’s former best friend Nadia last year…. Now on his next victim

I'm a radio Dj,blogger,teacher and entertainment critic who loves music and like promoting creative art to the world.
Previous Clear Photos Of Fella Makafui’s Raw Bu.tts Online – Fans And Celebs React
Next Man opens restaurant where homeless people can come in and eat for free