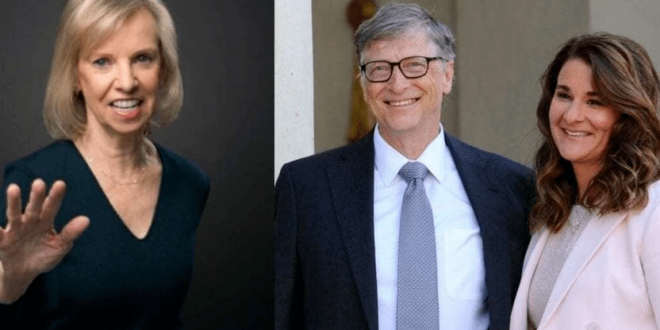 It has emerged that billionaire, Bill Gates has been taking long weekend holidays every year to spend with his ex-girlfriend and Melinda knows and agreed to it in their marriage contract.

Reports say Melinda was aware of this arrangement since their marriage in 1994 and has since complied with it over the past 27 years of marriage.

The said arrangement which gives Bill the freedom to see his 70-year-old ex-lover Ann Winblad every year is suspected to have partly influenced the pending divorce.

Walter Issacson, a reporter for the Time Magazine is reported to have disclosed this and other things in a profile piece of the Microsoft co-founder in 1997.

According to the article, bill and Ann Winblad (ex-girlfriend) met in 1984 at a Ben Rosen-Esther Dyson computer conference. After a brief friendship, they started going on ‘virtual dates’ by watching the same movie, at the same time, in different cities and discussing it on their phones.

Bill and his ex-girlfriend, Ann who happens to be a software entrepreneur and venture capitalist reportedly said they spend the long weekends vacationing together every year while sharing thoughts about the world and themselves and discussing Biotechnology.

News of the pending divorce broke this week and went viral across the globe leaving many people shocked but Bill and Melinda have explained that they both agreed that they cannot grow together as a couple but will continue to run their humanitarian foundation together.

I'm a radio Dj,blogger,teacher and entertainment critic who loves music and like promoting creative art to the world.
Previous Govt to tax calls on Whatsapp, Facebook and others soon – Minister
Next Rebecca Akufo-Addo salutes all mothers