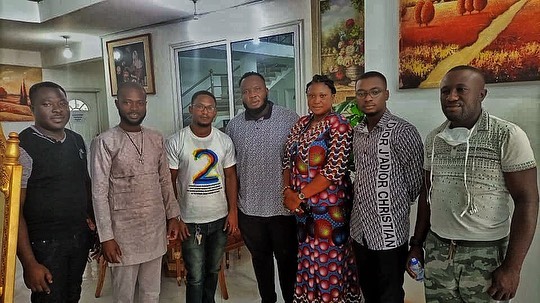 Yaw Berk is unfazed by the response from the Highly Spiritual boss that he will not work with him again.

After apologizing to Kaywa on the radio and on his Instagram page a few months ago, ‘Independent Lady’ singer together with his mother and Reverend Danso Abbeam, has rendered another apology to the record label owner.

In a video sighted by ghanaweekend.com, Yaw Berk and his mum are seen kneeling before Kaywa and begging him to consider working with Yaw Berk again.

Rev. Danso Abbeam of Abbeam Ministries hosted both parties at his office for the engagement.

Kaywa reiterated that he has forgiven Yaw Berk but should be circumspect about his actions.

On Citi TV’s ‘Citi Countdown’ a few weeks ago, Yaw Berk told host Emmanuel Sarpong that he was young and naive when he made all the false statements about Kaywa.

He said that he is not releasing any more songs until he thrashes out his differences with Kaywa.

“I just want to free myself. From 2019 to 2020 till now I’ve always wanted to apologise [to Kaywa] but the ways and means to go about it that was difficult he was angry [I don’t know if he’s still angry with me] and I didn’t know any means to go through to him,” he said.

He further noted that Reverend Danso Abbeam is the one who advised him to use the media to apologise to Kaywa and he trusts it will be difficult for him to succeed in his music career if he does not make peace with Kaywa.