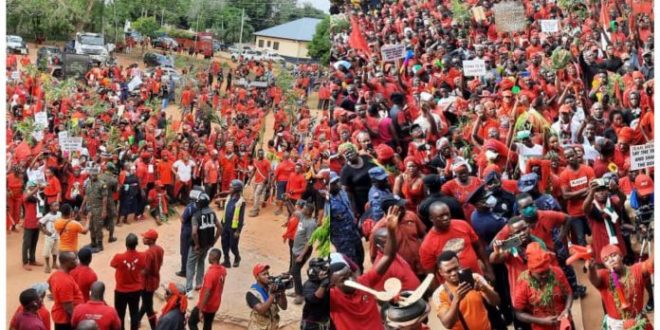 Thousands of NDC supporters in the Ketu South constituency took to the street to demonstrate against the 2020 election results.

Declaration of President Akufo-Addo as winner of the immediate past Presidential election is still causing unrest in some parts on the country. Supporters of the largest opposition party looks not to be backing down soon in an attempt to overturn the election results in favor of their candidate, John Mahama who boldly declared his intention not to concede defeat.

After several demonstrations at various constituencies, people of Ketu south in the volta Region also took to the streets in all red attires to protest against the entire Jean Mensa led Commission, calling for her to be fired immediately.

I'm a radio Dj,blogger,teacher and entertainment critic who loves music and like promoting creative art to the world.
Previous I’ll Not Divorce My Husband If He Cheats On Me – Mimi
Next Arrest John Mahama over violent NDC protests – Parliament