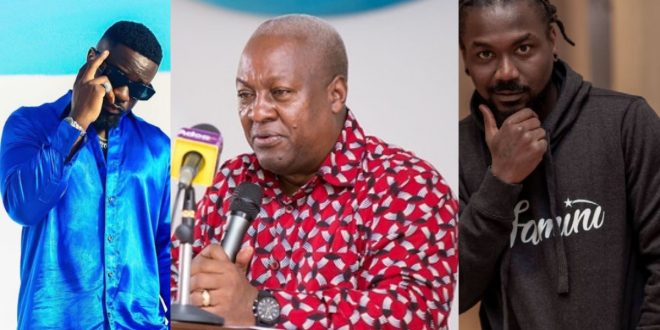 I’ve nothing against Sarkodie, Samini for supporting Akufo-Addo – Mahama

The NDC flagbearer John Mahama says he has nothing against musicians Sarkodie and Samini for endorsing President Akufo-Addo ahead of the 2020 general elections.

According to him, the artistes have their reasons for selecting their choice of leader and he cannot fault them for it.

“I don’t have any antipathy or anger for them. I like them, they are young talented musicians, and my attitude towards them hasn’t changed,” Mr Mahama said in an interview on Starr FM.

Sarkodie and Samini made their support for the incumbent government and its party clear on Monday, November

Samini had tweeted his support writing he was choosing to vote for a leader he believes has a “hopeful” future for the country.

Sarkodie also released his new song Happy Day featuring Kuami Eugene highlighting on some of Akufo-Addo’s achievements and why he wants him as President.

Meanwhile, John Mahama said that he prefers to not get celebrities involved in his campaign.

He explained that many people grow enmity towards celebrities when they make their political positions clear.