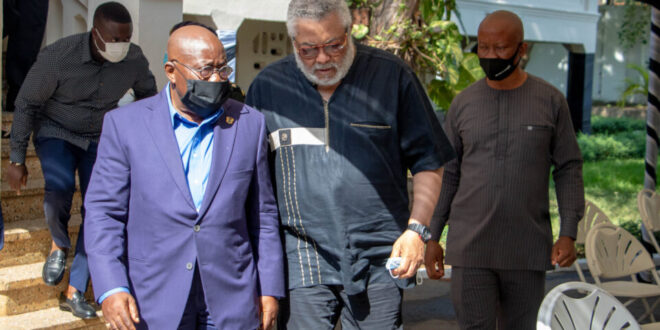 Consoling the former President, President Nana Akufo Addo said, “When my mother died I was Foreign Minister of Ghana, but I cried like a baby; so, I know exactly how you are feeling.”

The President said when news broke of Madam Agbotui’s demise he was out in the country doing some work, so he called the former President to offer his condolences and promised to personally visit on his return.

I got back to Accra last night and decided to call on you today,” Nana Akufo Addo said.

The Stool Father of the Anlo State, Ambassador Dan Abodakpi, who is also the Chairman of the Central Planning Committee of Madam Agbotui’s funeral, in responding to the President, said the family was grateful for the show of sincere comradeship and solidarity.

Ambassador Abodakpi proceeded to inform the President that the funeral of Madam Agbotui will take place on Saturday October 24 with a non-denominational service at the Forecourt of the State House, after which the body will be conveyed to Dzelukope for interment.

President Akufo-Addo who was accompanied by the Chief of Staff at the Presidency, Madam Frema Osei Opare and Eugene Arhin, Communications Director at the Presidency, later signed the book of condolence opened in memory of Madam Agbotui.

I'm a radio Dj,blogger,teacher and entertainment critic who loves music and like promoting creative art to the world.
Previous EC fixes December 1 for special voting
Next Akosua Agyapong may have been bribed to attack me – Rex Omar