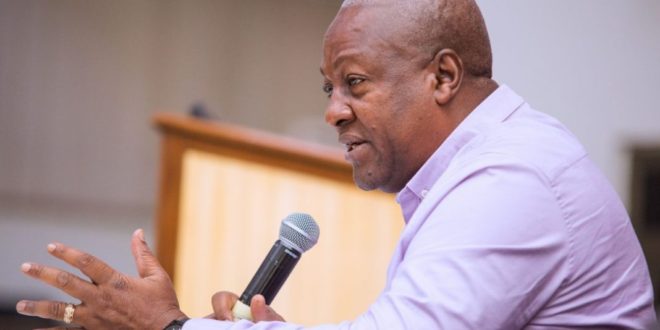 Nana Addo is the only lawyer who lies – John Mahama

Former President and current flag bearer of the opposition National Democratic Congress, John Dramani Mahama has once again jabbed his political rival whilst trying to clarify issues regarding free SHS.

He clarified that, his plan for the free SHS is that, he will work to make it better. “I’ve said that the double track system being implemented, I will come and complete all the infrastructure in the various schools so that Free SHS double track which now works like the traffic light that sees students moving in and out of school will be cancelled. We will take out the double track system so that all the students can be admitted at the same time. He stated.

The fate of the free Senior High School education which is the ruling Nana Addo led government’s main campaign tool has since been in contention; whilst the New Patriotic Party enthusiasts keep persuading Ghanaians that the opposition party will cancel the program when they resume power, the opposition party keep fighting to deal with such power threatening campaign.

I'm a radio Dj,blogger,teacher and entertainment critic who loves music and like promoting creative art to the world.
Previous Kuami Eugene says women he dated complained he didn’t have time for them
Next NDC to launch manifesto on August 31